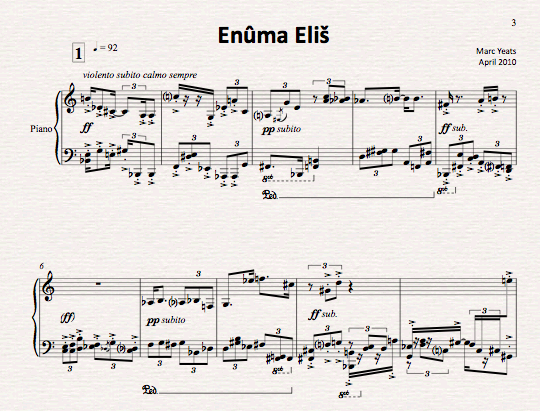 The Enûma Eliš is the Babylonian creation mythos (named after its opening words). It was recovered by Austen Henry Layard in 1849 (in fragmentary form) in the ruined Library of Ashurbanipal at Nineveh (Mosul, Iraq), and published by George Smith in 1876.[1] The Enûma Eliš has about a thousand lines and is recorded in Old Babylonian on seven clay tablets, each holding between 115 and 170 lines of Sumero-Akkadian cuneiform script. Most of Tablet V has never been recovered but, aside from this lacuna, the text is almost complete.

When the seven tablets that contain this were first discovered, evidence indicated that it was used as a “ritual”, meaning it was recited during a ceremony or celebration. That celebration is now thought to be the Akitu festival, or Babylonian new year. This tells of the creation of the world, and of Marduk’s victory over Tiamat, and how it relates to him becoming king of the gods. This is then followed by an invocation to Marduk by his fifty names.[3]

The title, meaning “when on high”, is the incipit. The first tablet begins:

Convert your PDF to digital flipbook ↗